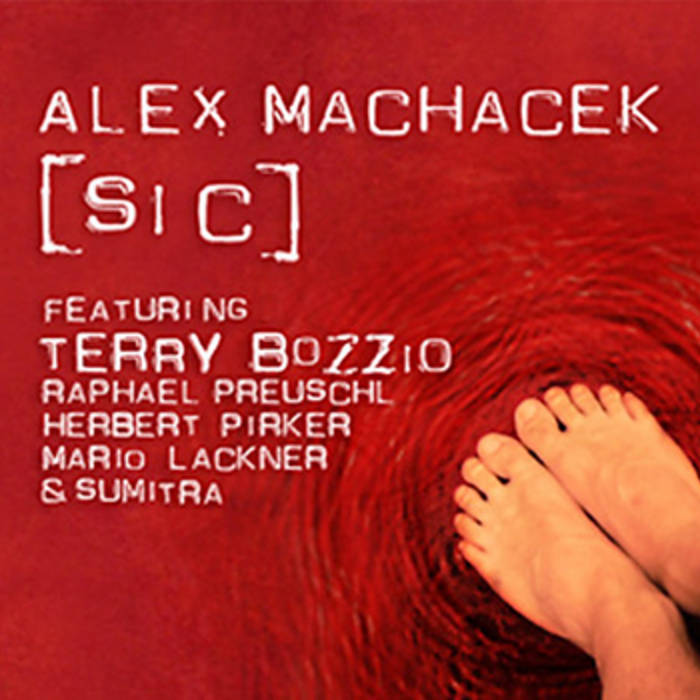 Over the course of a whole lifetime as a passionate observer and chronicler of the music scene, with a particularly keen interest in guitarists of all stripes, I have been blown away innumerable times by extraordinary players who bring something remarkable and personal to the table. Alex Machacek is one such extraordinary talent.

Combining jaw-dropping technique with a fertile imagination and a playful sense of humor, the Austrian six-string phenom has concocted an audaciously brilliant manifesto in [sic]. Imagine a composite of Allan Holdsworth’s stunning legato chops and advanced harmonic language with Mike Keneally’s exacting virtuosity and Frank Zappa’s fiercely uncompromising “difficult music” and you’re getting close to where this visionary new talent is currently operating. He is perhaps the only guitarist on the planet who could cut the impossible charts of Zappa’s Jazz From Hell and simultaneously breathe life into them.

Whether it’s interacting in a live trio setting with his Austrian homeboys Raphael Preuschl on upright bass and Herbert Pirker on drums, or building up intricate polyrhythmic pieces around pre-existing drum solos by former Zappa sideman Terry Bozzio, Machacek brings astounding facility and a wickedly inventive streak to the material on [sic]. As he explains, “Much of the work on this album involved my recomposing or recycling, as I call it; taking existing stuff and doing something with it.

There are several tracks where I composed to existing, improvised material. For example, the track ‘Djon Don’ is from Terry’s album Solo Drum Music (from 1994). I imported his drum solo and composed an entire piece around it. Similarly, the title track is a piece I composed around a six-minute improvisation that I asked Terry to do a few years ago. Again, I took his solo and worked around it.”

While this recycling process necessarily involves a deep communion with the computer, Machacek also interacts organically and brilliantly with bassist Preuschl and drummer Pirker on the album’s three live trio recordings, “Yellow Pages,” “Piano” and “Ballad of the Dead Dog.” Says Alex, “I’m really proud of the way my Austrian boys played. They are unknown and they are really young — Herbert was 21 when he recorded this and Raphael was 25. But I think they are really outstanding musicians.”

The hauntingly beautiful vocal feature “Indian Girl (Meets Austrian Boy)” is a collaboration between Machacek and his wife, singer Sumitra Nanjundan. “The first part is my arrangement of a song of hers that we did together on a record called Indian Girl,” explains Alex. “It’s basically a two-part song and the whole second part is so different than the original that I thought, ‘Let’s give it a different title.’”

Just as Alex had built up a composition around Bozzio’s pre-existing drum solos on “Djon Don” and the title track, he takes a pre-existing improvisation by bassist Preuschl and through overdubbing cleverly creates a guitar-bass duo piece he calls “Miss Understanding.”

Throughout [sic], Machacek can be heard playing several other instruments — a piano solo and a bit of marimba on “Djon Don,” some accomplished Percy Jones styled fretless bass on “Out of Pappenheim,” a bit of bass clarinet on “Austin Powers.” But as the maestro admits, “I do it all with the mouse, punching sampled notes into the computer. The only thing I really can play is the guitar.”

And boy, does he play! Machacek’s daring intervallic leaps, legato flourishes and seamless chordal progressions on “Out of Pappenheim,” performed live with drummer Mario Lackner, will no doubt make Holdsworth fans sit up and take notice. And his dazzling work on the challenging, polyrhythmic workout “Austin Powers,” an exercise in Zappa-influenced writing which he previously recorded on BPM’s Delete and Roll, contains some stunning examples of Holdsworthian, distortion-laced fusillades in the company of bassist Preuschl and drummer Pirker (with some overdubbed samples of Bozzio’s tom toms and bells along with discreet touches of sampled piano and sampled bass clarinet).

The collection closes on a gentle, darkly beautiful note with the purely improvised invocation “Ballad of the Dead Dog.” As Alex explains, “I just told the guys, ‘OK, we’ve got a little more time in the studio. Now we are going to play a ballad.’ And that’s all I said. I just started, and they basically followed. It just happened, which is the best part. That’s what I like the most, when you just play spontaneously and it happens like that.”

In all, [sic] represents an auspicious outing for this formidable new presence on the guitar scene.

Born in 1972, Machacek grew up in Vienna, where he began studying classical guitar at the age of eight and continued for six years. While his early interest in guitar outside the classical field tended toward rock (Queen, Deep Purple, Iron Maiden), he later gravitated toward jazz, with a particular interest in jazz guitar great Joe Pass. “I was pretty much a straight ahead player back then because that was what the people played around me. I learned the Great American songbook and just played as much as I could. When I was 13 or 14, somebody gave me a Joe Pass record and I became the biggest Joe Pass fan in the 14th district of Vienna. I fell in love with this guy’s playing.”

At age 16, Alex enrolled at the Conservatory of Vienna, where he studied jazz guitar. “Usually you go to school until you’re 18 and then enter the Conservatory,” says Alex. “But I convinced my mother to let me quit school so that I could attend the Conservatory earlier.” During that time, he gained invaluable bandstand experience in a wide variety of groups, from Dixieland to pop cover bands, big band to musical theater, singer-songwriter to contemporary classical as well as sitting in on jam sessions.

A turning point in Machacek’s development came after he encountered the music of guitar god Allan Holdsworth. “I was so attracted to his playing because I had no clue what was going on. All I knew was it was different, it was great and I wanted to figure out what he was doing. And I have to admit, I definitely became a Holdsworth addict. And while I don’t want to deny my influences, I’m also trying to get something identifiable happening in my playing.”

Some years after his introduction to Holdsworth’s wholly unique approach to guitar playing, Machacek had a similar encounter with Frank Zappa’s music, which had a significant impact on him. “I always liked Allan’s playing but I was also looking for something else on a compositional level” says Alex. “Then I found Zappa. Other friends were turning me on to his music but I think his album Live in New York was one of the keys for me. I fell in love with that record. And, of course, Terry Bozzio plays on that record, so I also fell in love with Terry’s drumming.”

Zappa’s Live in New York, originally released in 1978, featured the notorious chops-busting drum feature, “The Black Page,” which has since stood as a kind of proving ground for drummers everywhere. That intricate piece planted the seeds for Bozzio’s uncannily melodic approach to the kit, which he subsequently elevated to high art on 1994′s Solo Drum Music and 2006′s Chamber Works with the 60-piece Metropole Orkest of Holland. “In Vienna, everyone was always talking about this tune,” says Machacek. “The thinking was, if you could play ‘The Black Page,’ then you’ve made it as a musician. So I started transcribing it and learned it and just fell in love with that piece. ‘The Black Page’ is like a milestone. You learn that piece and it’s like earning your Bachelors degree.”

In 1993, Alex attended a summer course in Perugia, Italy, where he won a scholarship to the Berklee College of Music in Boston. It was during his stay at Berklee that he fortified his own approach to the guitar. At the time, the prevailing attitude among aspiring guitarists was to emulate either Pat Metheny or John Scofield, while the strictly straight ahead contingent identified more with the Pat Martino-Wes Montgomery camp. “But I wasn’t interested in any of that,” recalls Alex. “All of those guitarists are great but I was looking for something else. And what I came away with was the idea: Learn from them but don’t play like them. Instead, I’m trying to push past boundaries and hope that something new will come out in my playing.”

After completing his two semesters at Berklee, Alex returned to the Conservatory of Vienna to complete his degree in Jazz Education. He was named Guitar Newcomer for 1998 in a European guitar competition and the following year debuted as a leader with Featuring Ourselves. That same year, 1999, he was also introduced to his favorite drummer, Terry Bozzio. “A friend of mine (BPM saxophonist Gerald Preinfalk) had met Terry at a festival and found out he wanted to perform his ’5 movements for woodwinds and strings’. Gerald hooked Terry up with the jazz festival in Vienna and he asked me if I could help him. So I orchestrated all the strings for that project and Gerald took care of all the woodwinds. And that’s how we met. But after that part of the project was completed I thought, ‘Well, I don’t want to just orchestrate, I also want to play.’ So I wrote these trio tunes, and that’s how BPM actually evolved.”

That hookup led to an ongoing musical relationship which continues to this day. In 2001, they recorded Delete and Roll under the collective name BPM (for Bozzio, Preinfalk, Machacek) in Austin, Texas, where Bozzio moved his family after experiencing an earthquake in Los Angles. In 2002, BPM subsequently did two European tours. In 2003 Machacek and Bozzio performed with the former Zappa bassist Patrick O’Hearn (who had played alongside Bozzio on Zappa in New York). Their remarkable chemistry is documented on the DVD Out Trio. Bozzio and Machacek have recently formed a new trio with bassist Doug Lunn.

In October of 2004, Machacek and his wife Sumitra moved from their home base of Vienna to Los Angeles, where the guitarist has since created quite a buzz with his local appearances. As guitarist and producer Steve Khan said, “Alex’s creativity and skill levels are overwhelming. With his first full CD project, he takes these talents to new levels. To my ears, he is a talent to be watched for years to come.”

Bill Milkowski is a regular contributor to Jazz Times, Jazziz, Bass Player, Modern Drummer and Absolute Sound magazines. He is also the author of “JACO: The Extraordinary and Tragic Life of Jaco Pastorius” (Backbeat Books).